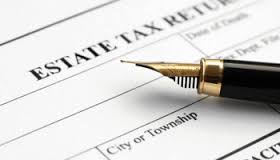 Under current US law, for 2017, the estate and gift tax exemption will be $5.49 million per individual, up from $5.45 million in 2016. That means an individual can pass $5.49 million to his or her heirs and pay no federal estate or gift tax. Surviving spouses can port over each other’s unused exemptions, allowing a couple to shield just a little less $11 million ($10.98 million) from federal estate and gift taxes. For taxable estates, the rate is 40%.Assets passing at death get a “stepped up basis” that allows capital gains to escape taxation. If a person bought stock for $200,000 and it’s worth $2 million when he or she dies, the $1,800,000 appreciation escapes capital gains taxation—but could be subject to the estate tax depending on the value of the person’s estate (including taxable gifts made during the person’s lifetime).

The Republican hard line position – estate tax repeal (1) coupled with continued stepped-up basis – passed on a 240-179 House vote in April 2015. The feeling within the US estate-planning bar is that, realistically, that’s not going to go through.

By contrast, Trump opponent Hillary Clinton’s now dead-on-arrival plan, piggybacking on Senator Bernie Sanders’ call for a responsible estate tax, was to toughen the estate tax by dropping the exemption level back to $3.5 million per person, and putting in new rates ranging from 45% up to 65% for mega-estates. Of course, with her Electoral College defeat Clinton’s plan is now academic but it does illustrate Democratic Party resistance to estate tax repeal.

And then there’s Trump’s compromise plan. Here’s how it’s described on the Trump campaign web site: “The Trump Plan will repeal the death tax, but capital gains held until death and valued over $10 million will be subject to tax except to exempt small businesses and family farms. To prevent abuse, contributions of appreciated assets into a private charity established by the decedent or the decedent’s relatives will be disallowed.”

Note: The Tax Foundation has an alternative reading of President-elect Trump’s plan: “the gain would be subject to tax when the inheritor sells the asset, not upon the death of the decedent.” This of course would allow for deferral of the tax on the gain until sale – which could be a good many years after death – if ever.

One notion is that any proposal that Mr. Trump offers with the support of the House would face a cooler reception in the Senate in the form of Senate filibuster (2). If so, estate tax change would have to be part of an overall tax reform effort, a deal involving compromise on both sides.

However, it may be that a filibuster and the attendant delay from the added Democratic Party leverage to compromise a repeal of the estate tax can be avoided through the US budget reconciliation process. This process would allow tax legislation to be passed by a simple majority of both the US House and Senate, both of which have a Republican majority.

Created by the Congressional Budget Act of 1974, “reconciliation” allows expedited consideration of controversial budget and tax measures in the Senate with limited amendment and no filibuster. Without the possibility of filibusters, reconciliation bills can pass in the Senate with a simple majority instead of the usual 3/5 majority often needed for controversial legislation. Lawmakers used reconciliation to enact large Bush tax cuts in 2001 and 2003 and more recently to pass and attack the Affordable Care Act. Another possibility: Republicans continue to make gains in the Senate in the 2018 elections, and convince more Democrats to go along with them getting repeal support up to the needed 60 votes (3) (6 current Democratic senators have voted for repeal at least once in the past, one source says.)

In the meantime, the federal estate tax exemption level keeps going up each year and more US states, but not all, are lessening the separate state estate and inheritance tax levy. As noted, it remains to be seen if estate tax breaks will be extended to non-US persons with US situs assets.

(1) It is unclear if this “reform” will be limited only to estates of US domiciliaries or US citizens. Technically, neither the US gift tax nor generation skipping tax is mentioned in the Trump Plan. However, the consensus opinion within the US tax bar is that the US federal gift tax and generation skipping tax will be eliminated if the estate tax is repealed.

(2) A filibuster in the United States Senate is a dilatory or obstructive tactic used to prevent a measure from being brought to a vote. The most common form of filibuster occurs when a senator attempts to delay or entirely prevent a vote on a bill by extending the debate on the measure. The rules permit a senator, or a series of senators, to speak for as long as they wish and on any topic they choose, unless “three-fifths of the Senators duly chosen and sworn” (usually 60 out of 100 senators) bring the debate to a close by invoking “cloture” under Senate Rules.

Special thanks to my partner, Linda Priebe, for her invaluable help on the article. Ms. Priebe lpriebe@culhanemadows.com is a partner in the Washington, D.C. office of Culhane Meadows, PLLC and a long time internal and external observer of the workings of the US federal government.

This Blog was originally published by the International Business Structuring Association in London here http://www.istructuring.com/knowledge/article/trump-estate-tax-plan/?show_articles=on