Remember to Thank a Lawyer on Independence Day 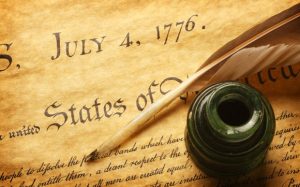 We know lawyers are easy targets (we enjoy lawyer jokes as much as the next person). Still, on the day we celebrate American independence, we note that primary author Thomas Jefferson and 23 other of the 56 signers of the Declaration of Independence were lawyers, that the document was crafted and understood fundamentally as a legal pleading, and is the product of careful legal thinking. In fact, the Declaration of Independence could be considered the most important lawsuit ever drafted in the United States of America!

Indeed, the structure and style of the Declaration follows a form familiar to most modern lawyers: an original complaint/petition used to initiate a lawsuit. There’s the introduction and “whereas” section (why we’re doing this); the list of Causes of Action (28 specific factual charges against King George III); the Prayer for Relief (severing the colonies’ political bonds to Great Britain to make them free and independent states); and finally, the verification (John Hancock and 55 others signing and “mutually pledging to each other our lives, our fortunes and our sacred honor.”).

Thomas Jefferson was an equity lawyer and the Declaration advances a familiar equitable breach of trust theory, asserting that George III was a trustee for the colonies and therefore owed them fiduciary duties, and that his failure to protect them from the capriciousness of Parliament was a breach of the trust for which equity provided the remedy of independence. However, since equity derived its power from an appeal to the King’s fairness, it seemed inconsistent for the colonists to seek relief from the King for a breach of the King’s fiduciary duties. Thus Jefferson and his fellow lawyer patriots crafted the radical legal theory that equitable power derived from the people, and that the Continental Congress, as representatives of the people, could impose the remedy of independence. And they did so “appealing to the Supreme Judge of the world for the rectitude of [their] intentions.”

Thus, the Declaration is much more than stirring political prose and may not have been possible without the work and deep thinking by a bunch of lawyers. So while you’re enjoying this weekend’s hot dogs, fireworks and sunshine, please remember to thank a lawyer. We can happily return to lawyer jokes on Tuesday!