Representations and Warranties:  How Should I Know?

by Susan Macaulay
representation, warranties
Comments are off

Anyone who deals with contracts, whether as a lawyer or a client, is familiar with representations and warranties.  Nearly all commercial agreements have them in some form or another. Often each party will “rep and warrant” to the other that it was properly organized and is currently in good standing in its state of formation, as well as other facts about its ability to enter into the agreement and the transactions the agreement reflects.  In acquisition agreements, there are typically numerous statements concerning various aspects of the business being sold, including the condition of its assets and the state of its current operations.  Commercial loan agreements often contain similar representations and warranties, including ones about the borrower’s financial statements and financial condition.*

Because many of the representations and warranties in acquisition and loan documents can be quite detailed and complex, it is not unusual for a party who has been asked to make them to throw up his hands and exclaim, “You can’t possibly expect me to make some of these reps and warranties.  I have no idea whether they’re true or not.” Alternatively, the party making the reps and warranties may return a markup of the document to the other side with “to the best of Company’s knowledge” inserted at the beginning of nearly every sentence in the reps and warranties section. 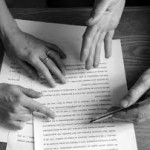 representations and warranties in legal documents were intended to be final statements of cosmic truths or the equivalent of a polygraph exam, this approach would be an appropriate way to evaluate whether a particular rep or warranty
should be included in an agreement.  There is, of course, no excuse for anyone agreeing to make a representation or warranty that he or she knows is false.  Aside from being unethical, immoral, and possibly fattening, it is, in virtually every case, a breach of contract, as well as, in some cases, possible grounds for a claim of fraud.  If the party who has been asked to make a particular statement that he or she knows is not accurate, the time-tested remedy is to attach a schedule to the agreement that explains what the exceptions to that particular representation and warranty are.  (In some agreements, the schedules are actually longer than the document itself.)

But what is a party to do when the representation and warranty involves facts that party has no reasonable way of knowing or verifying?  Is it fair, for example, to require a party to represent and warrant that there has never been any environmental contamination on that party’s property when the real answer is probably more along the lines of “How should I know?  I’ve only owned it for the past ten years.  I have no idea what went on before that.”

The answer is that it most certainly is fair, if the representations and warranties are to perform their real functions within the document – both to inform the other party of known facts relevant to the recipient’s participation in the transaction, and to allocate risk between the parties with respect to facts that are not, and cannot reasonably be, known at the time the transaction closes.   Viewed in this light, when a party represents and warrants that, except as set forth on a particular schedule to the agreement, there is not now, and never has been, any toxic waste on a particular piece of real property, the effect is (1) to disclose to the recipient by way of that schedule any toxic waste the party making the rep and warranty may know of, and (2) to allocate the risk associated with the presence of toxic waste on the property to the party making the representation and warranty, even if they had no idea it was there in the first place.  Every rep and warranty in a document is, ultimately, an agreement between the parties as to who will bear the risk if certain conditions turn out to be other than what the parties thought they were at the time the agreement was signed, not merely a matter of disclosure.

An alternate approach that is sometimes taken in these types of agreements is to allow the inclusion of knowledge qualifiers in the representations and warranties, and to then effectively negate them by requiring the party giving the representations and warranties to indemnify the other party for losses arising from certain conditions, without regard to whether a knowledge qualifier was included in the representation and warranty as originally given.  In the above example, the seller of the property containing the toxic waste would be required to indemnify the buyer for damages caused by the toxic waste, if any, even if the seller had no knowledge that it was there at the time the property was sold.  This approach requires careful drafting of the indemnification language in order to make the parties’ intensions absolutely clear to any judge or arbitrator who might subsequently be called upon to resolve a dispute between the parties over who is liable for losses resulting from a condition existing at the time of closing of which neither party was aware.

In a perfect world – certainly in a world unlike the one in which we operate now – a seller’s contractual obligation might read something like “I don’t know of any toxic waste on the property, but if there is any and it was put there before you bought it, I’ll pay for the cleanup.”  Until and unless commercial contract are written this way, however, careful scrutiny will remain a necessity to insure that all risks, known and unknown, are allocated as the parties intend.

* While there is a difference in meaning between the terms “representation” and “warranty,” for purposes of this discussion, we will use the terms together, since it is the exception, rather than the rule, that either term would be used alone in a commercial contract.

Susan J. Macaulay focuses her practice on commercial transactions and corporate matters, including banking and finance, mergers and acquisitions, leases, contracts, licenses and other business agreements, and corporate governance. She is the author of a number of books and articles addressing various topics involving transactional and finance law, and has spoken at many conferences on both a local and a national level.