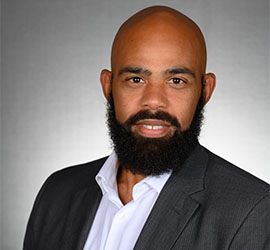 Download VCard
An innovative transactional lawyer focused on utilizing the law as a tool for improving rather than stymying business operations and methods for intellectual creatives: artists, entrepreneurs, and growth-oriented businesses.

He began his legal career at an AmLaw 100 firm founded in Philadelphia, representing commercial litigants in a range of disputes from copyright infringement to breaches of contract and related claims as well as entertainers who required sophisticated and diverse commercial transactions from diligence on film projects to renegotiation of complex record deals. Now, in addition to traditional artists, he represents intellectual creatives who explore the intersection of technology and traditional entertainment

He has seen the power of artists and entrepreneurs to change the world, and he seeks to continue to represent intellectual creatives’ interests while developing their business aspirations. Mr. Campbell takes his passion into the community by participating as a member in the Copyright Society of the United States of America (CSUSA), Philadelphia Chapter and the Black Entertainment and Sports Law Association (BESLA). He also has volunteered for the Philadelphia Volunteer Lawyers for the Arts and participated in the Arts & Business Council of Philadelphia’s Business on Board program, a six-month boot camp-style course on the ins and outs of non-profit governance.

Sekou appeared in the 1991 film New Jack City opposite Ice-T, the first time he ever played a police detective. Voiced the character of “Snow” in the videogame remake of the cult classic Warriors released by Rockstar Games. Prior to his legal career, Mr. Campbell taught mathematics for two years in an under-served community in the Bronx as a Teach for America corps member. He then earned an M.F.A. in Theater at Columbia and became a professional actor (for theaters like LaMaMa ETC, the former Berkshire Theatre Festival, and Vital Theatre Company); founding teacher of the Bronx Charter School for the Arts, a groundbreaking school designed to utilize all art forms (theater, dance, music and visual art) to aid students’ academic and overall development; and theater producer at the Mud/Bone Collective. Working at a start-up school and theater company, Mr. Campbell began to see how creative intellectual companies require strong and thoughtful legal representation, which inspired him to pursue a legal career to further support of the arts.