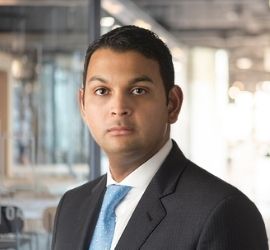 Sal Subasinghe focuses his practice on preserving and protecting clients’ interests in international arbitration and litigation proceedings. He has also represented companies and their officers and directors in securities and shareholder litigation, SEC enforcement actions, and related investigations. Sal has experience litigating cases in both federal and state courts, including witness examinations, oral arguments and preparing multiple dispositive motions in federal securities class action litigation.

Sal maintains an active pro bono docket, including criminal and immigration cases. As a special prosecutor for the City of Austin, he has tried ten misdemeanor cases to a jury and argued an appeal. He has also represented an indigent criminal defendant indicted on conspiracy charges by a federal grand jury.

During law school, Sal was an Associate Editor for the Houston Law Review and received the LEX Award for Administrative Law, Civil Procedure, Property, and Legal Research and Writing. Prior to his legal career, Sal worked for five years as a member of technical staff in the high-frequency product engineering group of a major semiconductor manufacturer, where he focused on failure analysis and simulation of radio-frequency integrated circuits.

During his legal career, Sal has been involved in a broad range of matters across diverse industries. The following are some representative examples of his prior client engagements: