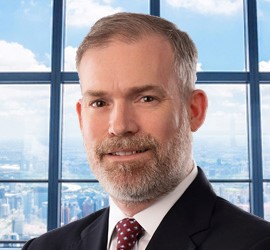 A strategic thinker to guide clients on global patent procurement and enforcement strategies, with an emphasis on chemical and pharmaceutical industries.

Jeff Vockrodt represents both patent owners and challengers in disputes involving a wide range of technologies, including additive manufacturing, semiconductors, medical devices, pharmaceuticals, biotechnology, and chemical processing. Jeff serves as lead counsel in inter partes review (IPR) proceedings before the Patent Trial and Appeal Board (PTAB), and has substantial experience throughout all aspects of ex parte and inter partes reexaminations in addition to interference proceedings before that tribunal including appeals to the Court of Appeals for the Federal Circuit (CAFC).

Jeff is a registered patent attorney with a chemical engineering background. He served for four years as patent examiner before the United States Patent and Trademark Office and a law clerk in the United States International Trade Commission Office of Unfair Import Investigations before entering private practice.

Jeff counsels several start up, mid-size and large pharmaceutical and medical device companies on all aspects of intellectual property protection including patent and related exclusivity issues, including:

Jeff also enjoys exploring the implications of new legislation, contributed observations to the rulemaking process for implementation of the Leahy-Smith America Invents Act to create the PTAB, and has written on several cutting-edge issues relating to Post-Grant proceedings including: